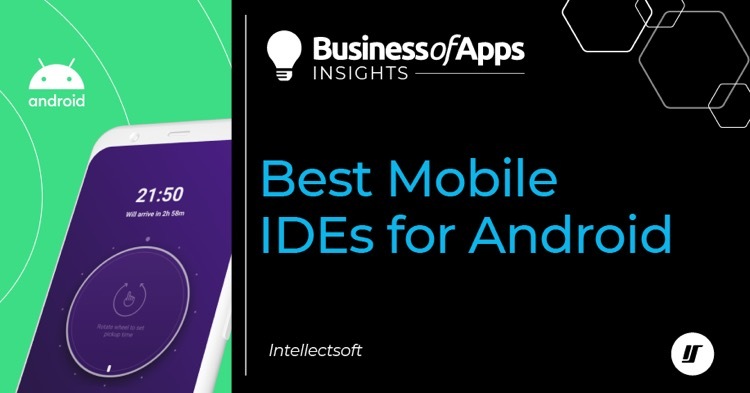 Today, Android is perceived as the best mobile operating system by many developers. It is easy to understand them: Android is highly customizable, supported by a large community, and most smartphones operate on it. As a result, the demand for using different Android IDEs (Integrated Development Environments) for mobile app development is similarly high. Fortunately, there are tons of tools and platforms available in the market that can help you build incredible mobile apps for Android.

To help you choose the right IDE quicker, we have put together a list of the best integrated development environments for Android devices.

Visual Studio, or simply VS, Microsoft’s integrated development environment retained its position among top IDEs and became an indisputable leader for Android app development. Visual Studio became integrated with Xamarin, another original framework that is nearly as popular among developers as VS itself, mainly for using C++ and its multi-platform nature. Equipped with robust tools for swift coding, this IDE enables developers not only to develop eye-pleasing mobile apps but also to test different functions. VS also gives analytical data to developers, helping them to boost app speed and perform bug fixes quickly. With Visual Studio, software developers can build efficient and error-free apps with great UXs.

Android Studio is currently named the most featured choice available for developers now, with no alternative (in part owing to last year’s progress with Arctic Fox that enabled Bumblebee to work with Compose). Although Android Studio offers significantly more features to improve the process of building Android applications, there is still another pretty good option to build cross-platform apps using a single programming language. Relying on Dart as a programming language (rather than Java or Kotlin used by Android Studio, Flutter is also valued among developers, as it allows users to construct native feel apps that are smooth and slick like native ones. Flutter has recently gained in popularity, as it offers responsive views without JavaScript.

Arguably the most popular mobile IDE for programming in Java and C++, AIDE is a huge coding suite aimed at programmers of all levels. It allows to create C/C++ NDK and Java/XML apps for Android, as well as pure Java console applications. When you try this IDE, it really gives you a feeling that you could develop mobile apps only with your phone or tablet.

Aspiring newcomers can purchase interactive step-by-step courses that include Java programming, Android development, game development, and even creating apps for Android Wear-based devices. It should be mentioned that the IDE has an exceptionally user-friendly UI, so you can grasp what it has to offer quickly. It is easy to create a new project or switch between existing ones. Also, when creating a new project, you could easily download source code from a remote repository or just create a new repository for future collaboration right inside a project.

Another feature is the ability to connect a Bluetooth keyboard, you can even bind hotkeys to main functions inside the IDE. The code editor itself has smart syntax highlighting and you can scale the window to change the amount of code that you’re able to see at once.

AIDE offers real-time error analysis as you type, and automatic quick fixes for simple errors, like auto-implementing methods or fixing imports. Navigation inside a project is very easy, and you can watch not only code structure but also debug information like Logcat logs. The only downside of this IDE is that it doesn’t give you the ability to set breakpoints and debug your app.

This is an IDE for mobile development in both senses as the main purpose of DroidScript is to write relatively simple JavaScript-based applications for phones and tablets. Still, if you are not familiar with the JavaScript programming language, you should look for a Java-oriented IDE. Its current version can access most of the features of a typical Android device, including GPS, compass, accelerometer, sending and receiving text messages, etc

Additionally, DroidScript users can make the most of a browser-based IDE, which allows for establishing a connection between a PC and a mobile device so you can use a full-size keyboard and a big screen while running the code on your Android device.

The application includes plenty of documentation and a lot of examples of simple apps, which you could combine to write your own. However, writing code in a browser has its disadvantages: you need to open an additional application to code and switch between them occasionally. Also, the browser itself doesn’t give you a lot of features, for example, code completion or automatic error fixing. From our experience with this IDE, we would rather say that it is more like a good text editor, giving you the ability to run your .apk immediately.

As the name implies, CppDroid is an IDE for C/C++ development. It offers a full set of tools and features for experienced developers, as well as examples and tutorials for those learning the art of coding.

When you launch CppDroid for the first time, the IDE will download all needed libraries and create a simple HelloWorld application.

CppDroid has a highly customizable code editor with smart syntax highlighting themes, auto-indentation, and auto-pairing. Its features can be further extended with add-ons, which include a lot of application examples, programming tutorials, and even lessons for beginners.

You can also watch compile errors and warnings in special windows. On top of that, the IDE automatically fixes simple code-style warnings. You can also set specific compile and link options for each project setting.

Even though this IDE is a bit unstable, it still gives you an opportunity to create fully featured C/C++ applications with your mobile device.

The IDE’s developer markets the product as a great tool for those who want to learn web development and promises to include new features in future releases.

Unfortunately, all the best features of this IDE are hidden behind the paywall. Still, when you unlock them, you get amazing functionality. You can get the ability to clone projects from the Git repository, auto-format code structure, and use your Bluetooth keyboard with hotkeys.

Python is a popular high-level programming language that is mainly used for app development and projects that use artificial intelligence (AI). The core features of Python IDE include debugging support, syntax highlighting, and auto code formatting. Python offers other IDEs for building high-quality apps, Pycharm and Spyder being the most popular as they offer plenty of advantages for developers.

Java is a general-purpose programming language whose developers need an IDE to deal with difficult parts of writing Java code and using frameworks for Android app development. Some of the popular Java IDEs are Eclipse, NetBeans, and IntelliJ IDE. All of them help to code and debug software written in Java easily. Regardless of what tool you choose, all these Java IDEs offer powerful tools for building and testing Android applications.

Eclipse is a free open-source IDE that is used for building applications in Java and other programming languages. It is the second most popular IDE in the world. It has a vast support community and numerous plugins and configurations available. This Android IDE is used for creating comprehensive Android applications, IDEs, and other tools. It is highly customizable and can be used for any programming language for which the plugin is available. Eclipse is one of the best Java IDEs as it provides developers with a powerful and rich-featured tool for creating advanced Android apps.

Arduino IDE is an open-source platform that runs on Java, with built-in functionalities that make editing, debugging, and compiling code in the environment easier. It is available for different kinds of operating systems, including Android, and makes the code compilation extremely easy — Arduino is incredibly newcomer-friendly.

Unreal Engine (UE) is an advanced IDE for Android game development that serves as a solution for the complexities of building high-level interactive games. This is a free and open-source tool, very popular among game developers due to its Blueprint System, allows achieving more with less code. If you are new to Android game development, then this is the right option for you. Unreal Engine is relatively easy to grasp and user-friendly in general. It has also been around for years, so finding solutions and workarounds online will take little time. UE’s other features include a user-friendly interface and the ability to test your app thoroughly.

The official IDE for Android, Android Studio is a software suite built by Google that has everything that will help you develop a solid Android app. It is known as the world’s third most famous IDE and can accelerate the development process without sacrificing quality.

This IDE is ideal for those new to programming as it has app-building tutorials that help to grasp mobile and enterprise software development. Some of the features that make Android Studio a top integrated development environment are its flexible build system, real-time analyzer, intuitive visual layout, and smart code editor.

Corona is a highly popular coding tool among software developers and a top Android development IDE. From writing programs to deploying mobile apps, it ensures that coders have an issue-free mobile app development. Corona enables software engineers to develop adaptive and responsive apps, and developers also use this IDE for testing and making changes to the app after the release. Moreover, it is known for its well-maintained documentation and active support community. It also features previewing capabilities with which developers can see how the app looks after changes have been made. What’s more, Corona enables programmers to test the final version and fix issues quickly and effectively.

Supported by Apache and Adobe, Phonegap is a widely used IDE for Android app development. It helps programmers to build highly interactive mobile apps and allows them to see changes on their connected mobile devices instantly. It is an open-source integrated development environment that provides faster debugging and cycle building. Other useful features of Phonegap include third-party software tools, a highly active support community, and a vast plugin library.

Which Is the Best IDE for Android App Development?

There are many mobile IDEs available in the market and we have outlined the very best of them to help you build engaging Android apps. Each mobile developer has personal preferences as to what IDE to use in a given project. Different projects have different challenges, and there is no universal IDE. So, choosing the right IDE takes time and some effort. We hope that the list of the best mobile IDEs for Android we have shared will help you excel and boost your productivity after you find the best IDE for yourself.

In case you want to learn more about mobile app development and how your team can start benefiting from it today, don’t hesitate to contact our experts and find out more. Native vs cross-platform development: which one is the best option in 2022? Fintech mobile apps: main trends to keep an eye on