This post is part of our series of articles from the App Promotion Summit 2013, taking a closer look at the event’s speakers and bringing you the key points from their talk. Click here for a round-up of more App Promotion Summit coverage
InfoBip specialises in global mobile messaging marketing, encompassing SMS messaging, push notifications, number context and m-payment solutions, allowing app developers to reach and engage millions of users. InfoBip also boasts its own in-house development team, cloud-based solutions, and partnerships with global mobile operators. The company has over 25 offices throughout Asia, Africa, Europe and the US. 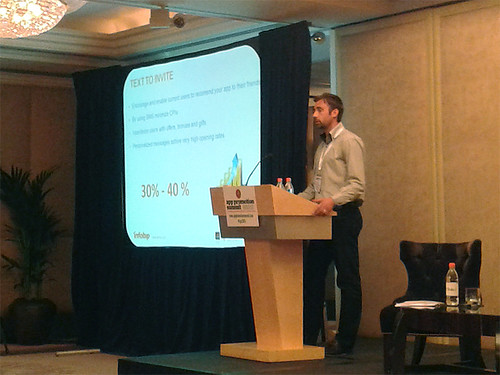 Mobyaffiliates caught-up with InfoBip’s head of global partnerships Rube Huljev to talk more on the benefits of using mobile messaging.

Mobyaffiliates: Is it hard to sell the value of SMS to developers? It seems like such an old tech.

Rube Huljev: Developers understand the value and they understand the ROI and the understand the measurability and the figures that come out of it. Those kind of engagement figures are not contested by any other channel – they are way higher with SMS. But we need to evangelise SMS is when we deal with brands and with agencies. They might be looking for some sexy new technology, which converts in tens of thousands instead of millions. That is the big job we have – evangelisation of old school tech toward agencies and brands.

Do you have to do similar evangelisation with push notifications?

Push notifications are a completely different topic. We do need to evangelise push notifications to the developers, because they can get a lot more out of push if they partner with an expert. Of course, anybody can do push notifications by themselves but the point is that you might be better off by investing your development power into your own app and niche, rather than into an additional feature like push. So it’s better to leave this to third party companies that do push notifications well and who can put a lot of resources into it. Plus, in the end, it’s really cheap. Any marketing person can do a very effective campaign, instead of focusing on the tech.

How big a problem is spam and how to you avoid it?

Too much spam is an issue. But the final choice should be left to the user. In the ideal case every user should be able to set the frequency of the message and the type of events that trigger it. If the message is informative and very personal, it’s not spam. If you let the user make their own choices then they feel OK.

Do you see a lot of devs getting this wrong?

When we start working with developers we try to educate them on doing it right. But we’ve seen a lot of external companies who get it very wrong and there are certain networks, who do not target at all. Mainly networks are the ones getting messaging wrong.

What about new messaging platforms like WhatsApp? How will they fit in? Are they a threat?

Definitely not. That is a a threat to the mobile operators, because they are losing the so called person-to-person traffic. These new messaging platform will, in the end, eventually become a partner of ours and another channel to place those messages. Those particular apps, like WhatsApp, they know a lot about users, which means you can target those messages very finely. But at this moment they are not a threat and I don’t think they will become one.

Visit InfoBip’s website, or take a look at more of mobyaffiliate’s coverage of this year’s App Promotion Summit.

40% of Gen Z and millennials are shopping on social media

See all in App Developers